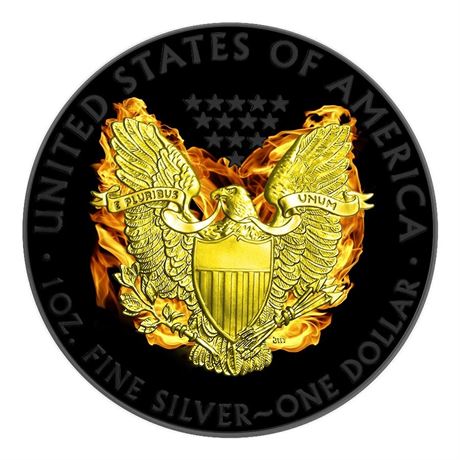 This beautiful new black coin issue features a BURNING PHOENIX. Eagle is in gold with all filigree details. The coin is completely plated with Ruthenium and partly with pure gold. The precious metal Ruthenium is a member of the Platinum Group and worldwide very rare. All this together with the luxury box and the noble certificate makes a perfect present and a worldwide searched collector’s piece.

The coin’s reverse depicts a flaming eagle gilded in gold. On top the inscription “UNITED STATES OF AMERICA”, and on the bottom of the coin the inscription “1 OZ. FINE SILVER COIN – ONE DOLLAR”. On the coin’s obverse we find the Walking Liberty.

Enhancement was done by a private mint in Germany.